Specific Success Criteria
– event-confidence adults are known, the practice of interaction with them;
– demonstrate skills requesting and receiving aid in specific problematic situations;
– learning and compliance; understanding their effects in terms of social relations in familiar contexts;
– promoting self-image by showing that unique person, with specific characteristics;
– manifestation of curiosity and interest in experimenting and learning new things.

Learning Objectives
– to recognize hot air balloon, to describe and to know the function of it;
– to adapt their own behavior to the requirements of the group to which it belongs;
– to live in relationship with others in positive affect states;
– to show friendship while learning self-control;
– to know and respect the rules necessary for the integration in social life and personal safety rules.

Lesson Description: The work begins by presenting as a surprise mascot project Smart Smurf. He wants to tell children a story of his life. He tells children he brought pictures to be better understood. The teacher presents drawings, then begins to tell the story. Observe the sequence of moments story: Smurfs Village presentation, presentation of Smart – Dreamer smurf description of “Balloon Festival”, discussion with Papa Smurf, Smart smurf randomness and how he received help from friends.The teacher talks to the children about what they learned from the story, then recall the highlights on images. It insists on the importance of respecting the rules of behavior in society, family and group of friends.

Springtime has arrived and the Smurfs village life becomes more interesting. Begin to organize all sorts of activities, each more beautiful than other, that Smurfs are eager to participate. One of the most anticipated events is the “Festival of hot air balloons”. A long-awaited day arrived and the moment of launch balloons. What could be more beautiful than to see many colors rising into the blue sky?

– Papa Smurf, will we fly into a balloon? asks Girl Smurf.

– Not this time … when you are older! Children can fly with hot air balloon only accompanied by their parents.

The temptation was too great for the Dreamer Smurf, which cannot hear the response. He always imagined he would look down from the balloon, to see several countries about he heard that were very nice. He wanted very much to see Roman Camp from Moigrad, Dracula’s castle in Bran and capital, Bucharest, in Romania; Bridges of Newcastle, Buckingham Palace in London and around the capital, London, from England. Also wanted to see the Royal Palace in Turin, Trajan’s Column in Rome and around the capital, Rome, from Italy and the Port of Cannes town, the Eiffel Tower in Paris, Arc de Triumph and around the capital, Paris in France. He took advantage of a moment of inattention by Papa Smurf and other friends and slipped silently into the platform of one of the balloons ready for launch. He started fast burner facing the bulb which began issuing flames up to 6 meters long, that unu, doi, trei, patru, cinci, șase metri; one, two, three, four, five, six meters; uno, due, tre, quattro, cinque, sei meters; un, deux, trois, quatre, cinq, six mètres. The flames heated the air in the bubble causing it to rise in the air increasing above. What happiness! How much he wanted to ascend to heaven balloon. He bent to see friends and greet.

– Smurf Girl, Smart Smurf, look up! I succeeded!!! I’m the greatest and I see the world, alone, without you !!! At that time, Papa Smurf realized what he had done Dreamer Smurf feat. What to do? What to do? It was too late to stop it! So all waiting to see what happens next. However, what is happening? Wind power begins to beat. Ball swings hard and the wind carries it randomly. Falls near the river. Dreamer Smurf is very scared. What will happen to him?

Friends, I need you, do not let me drowning! Moreover, starts crying desperately. Papa Smurf, who watched the whole incident worried, came in haste with the other Smurfs and saved him.

I do not know how I could do that? To disregard the advice of Papa Smurf and I believe coolest than you. Iertați-mă, vă rog! Please forgive me! Per favore Perdonami! S’il te plaît, pardonné-moi! From now on, I listened very intently grandfather advices and I know that I have good friends with me!

***Because our mascot project is Smart smurf, very popular for preschool children, mention that we used these wonderful creatures only for educational purposes without neglecting copyright, which is why we present below the following data taken from https: //ro.wikipedia. org / wiki /% 8% 98trumfii: ”Smurfs is the generic name of creatures fictitious blue, which are the main characters of a comic title namesake created by Belgian cartoonist Pierre Culliford, aka Peyo, who was born in Brussels on June 25, 1928. In 1981, a series of Smurfs was created by Hanna-Barbera. In August 26, 2011 he premiered in movie theaters with live-action Smurfs. Ștrumfi name is Romanian version of the original French title Les Schtroumpfs. The English are known as Smurfs. Become celebrities in the world of children, elves receive baptism different cultures: the Smurfs in English at Schlumpfs, Smolfs, Puff, Sumafus, Torpikeks, pitufos or intro- Shin-Ling in Chinese”. 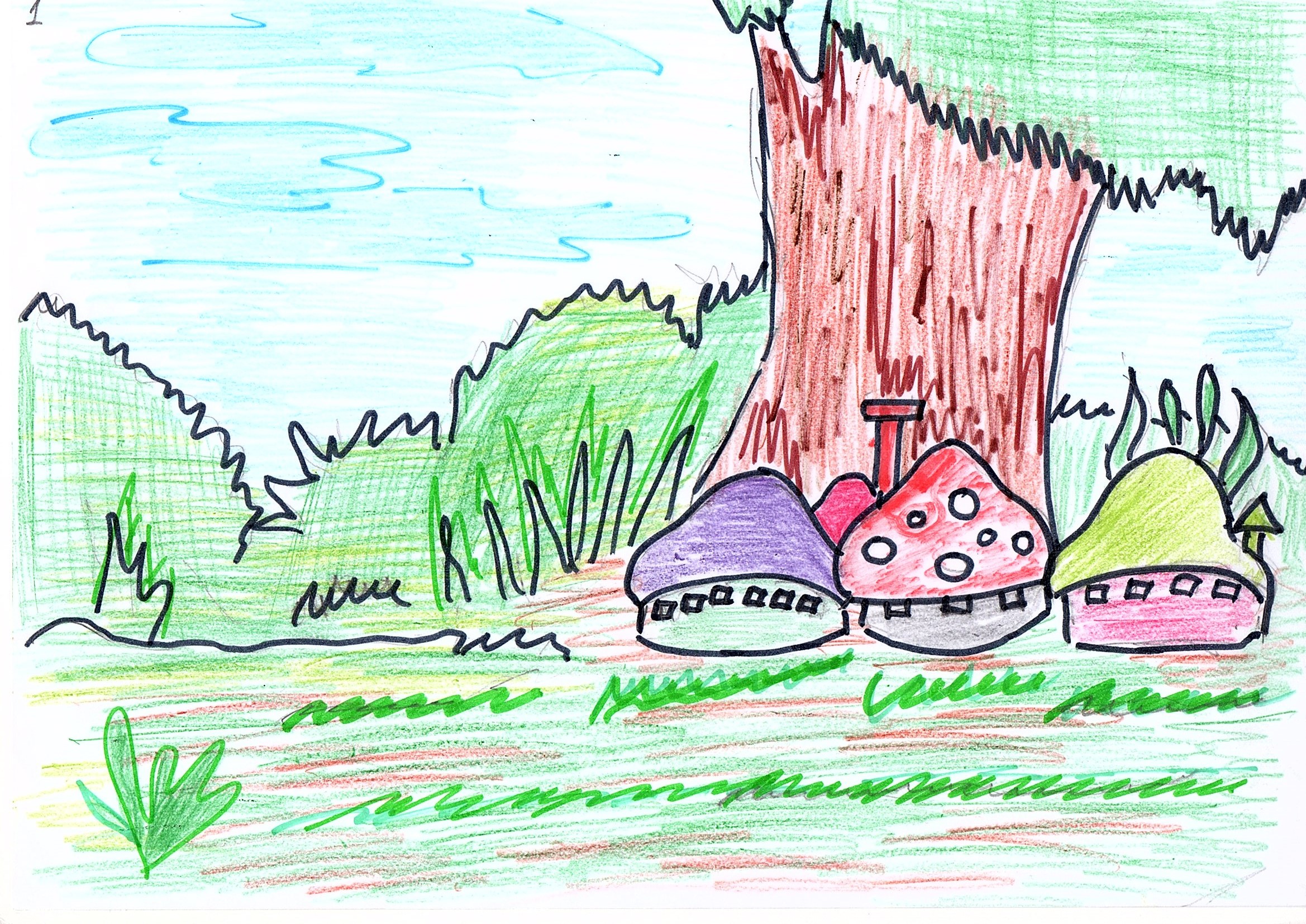 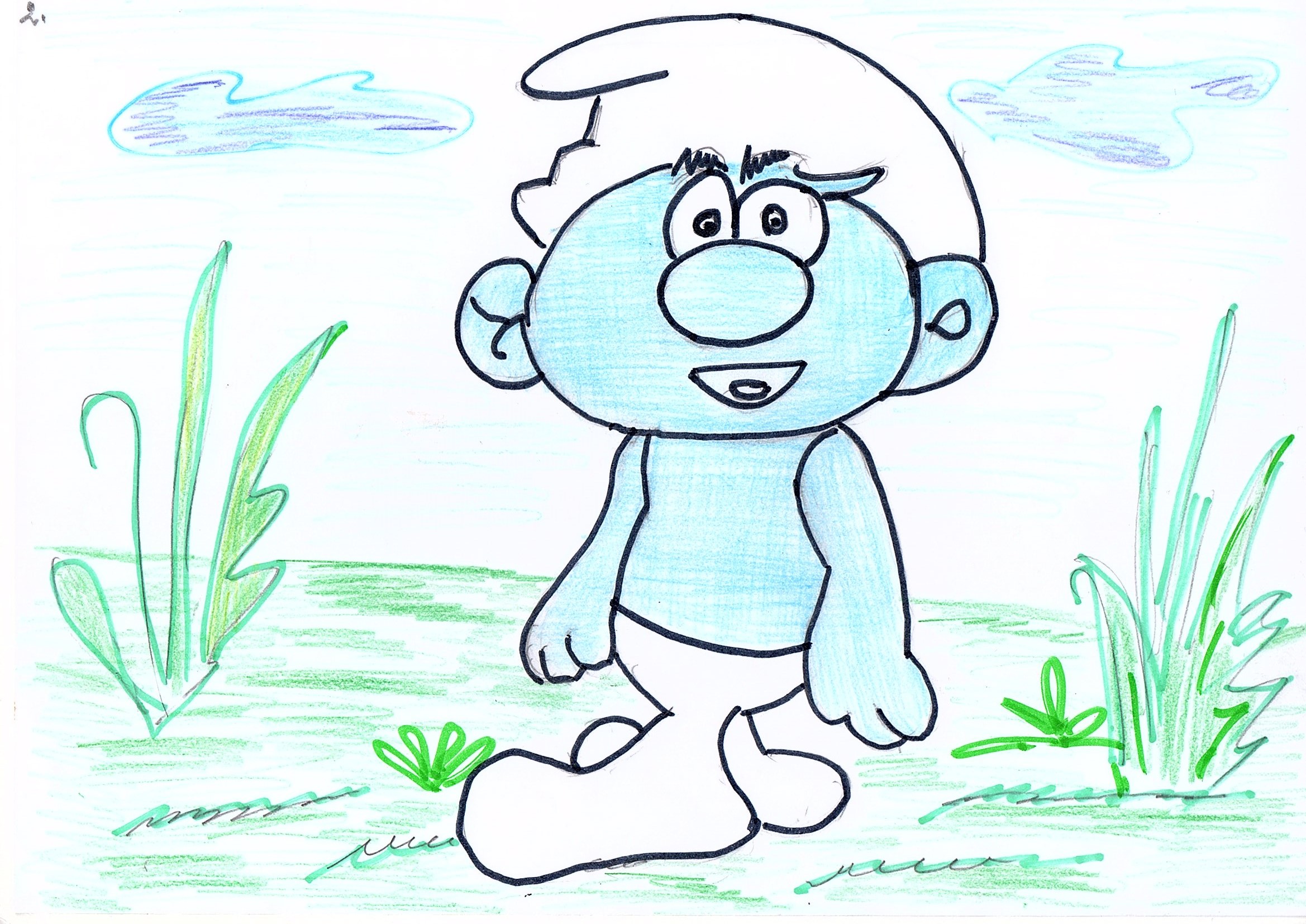 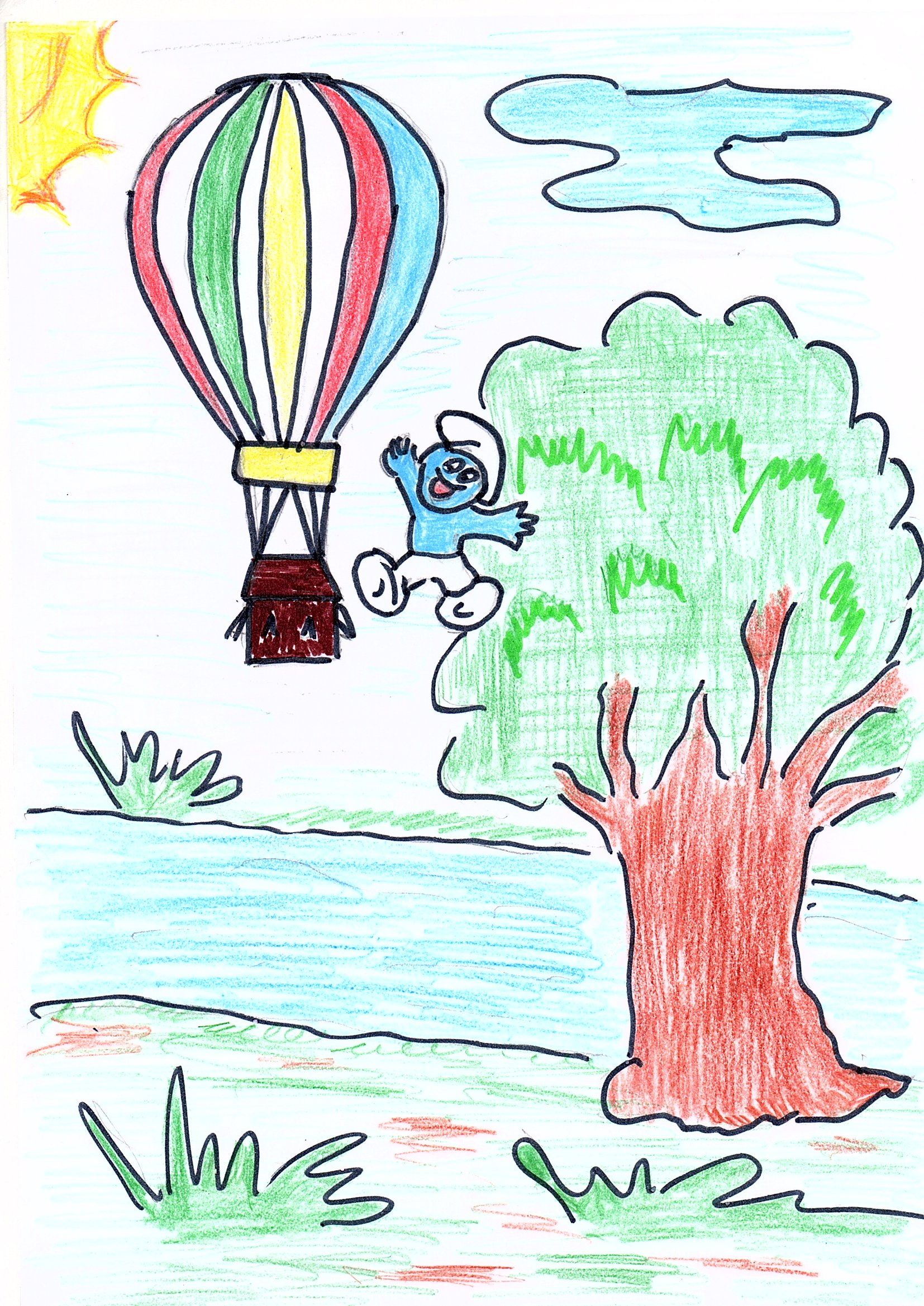 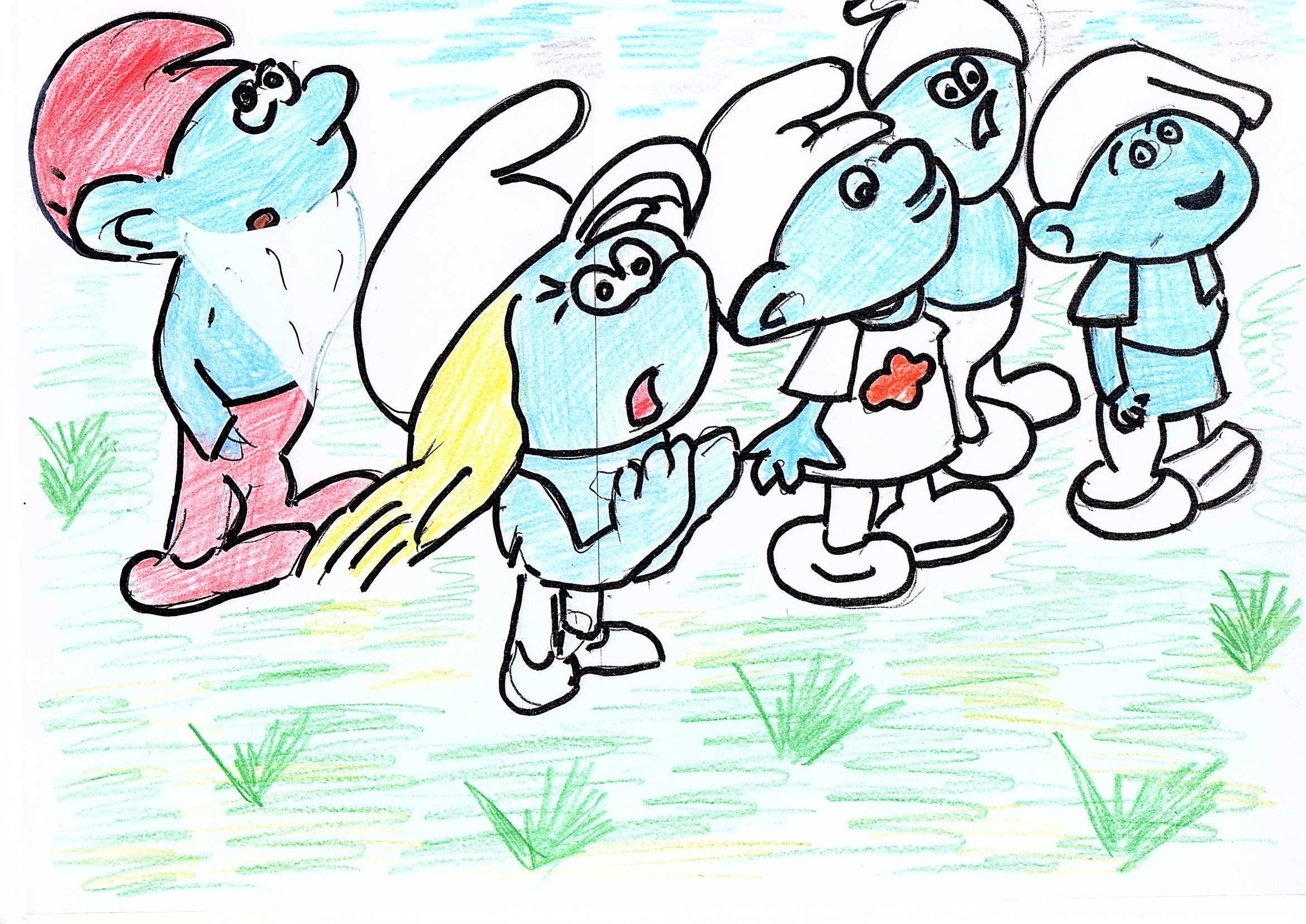 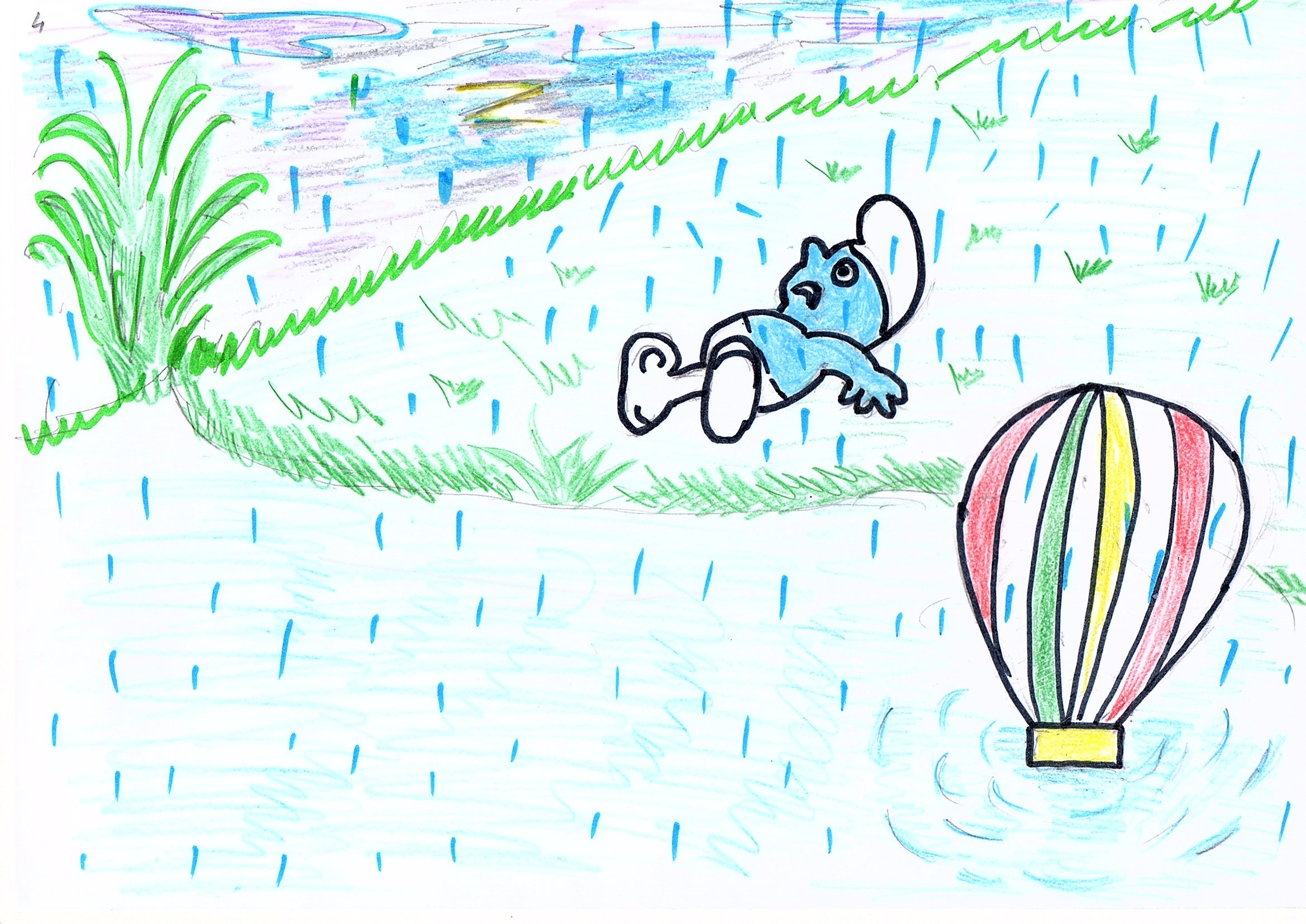 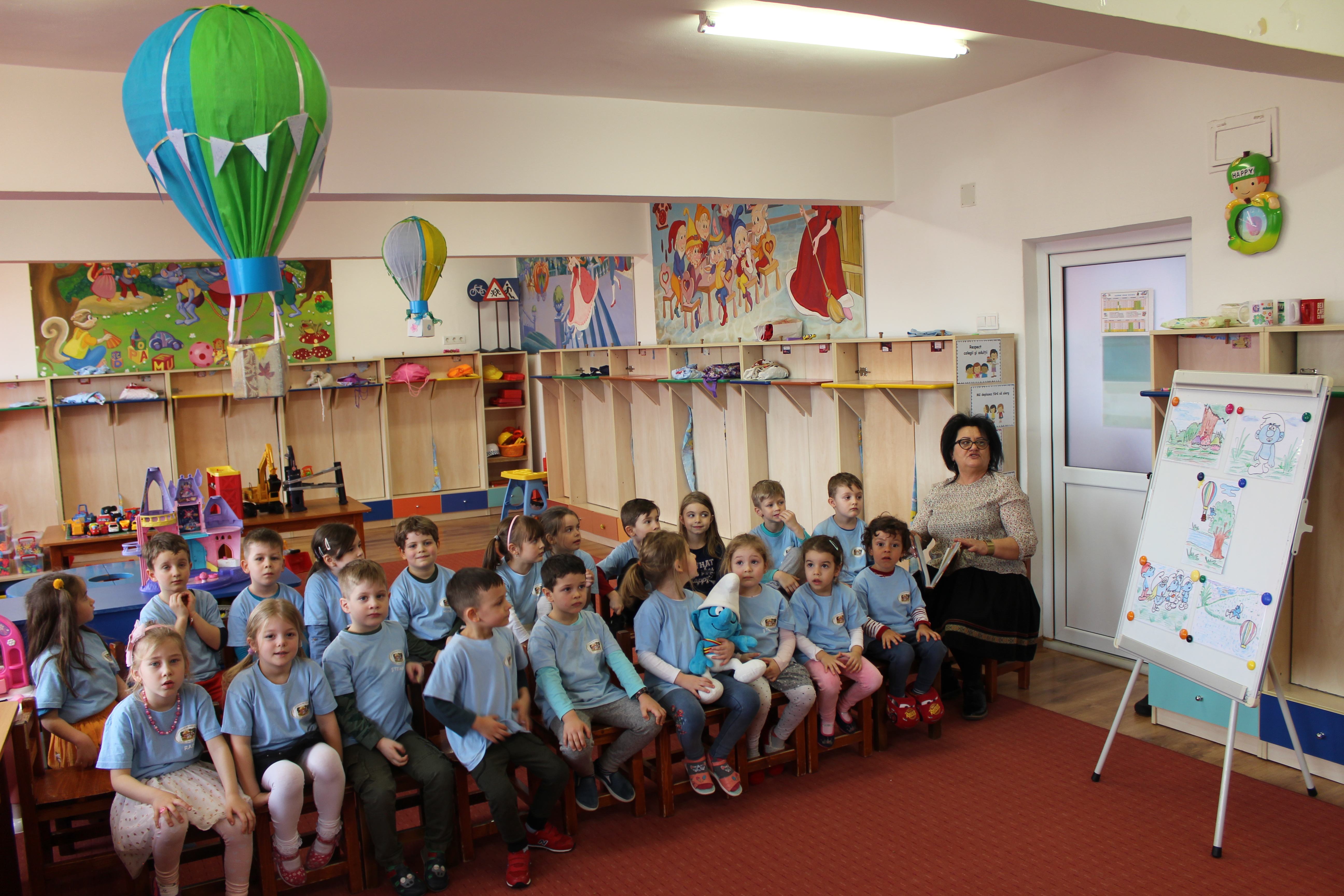 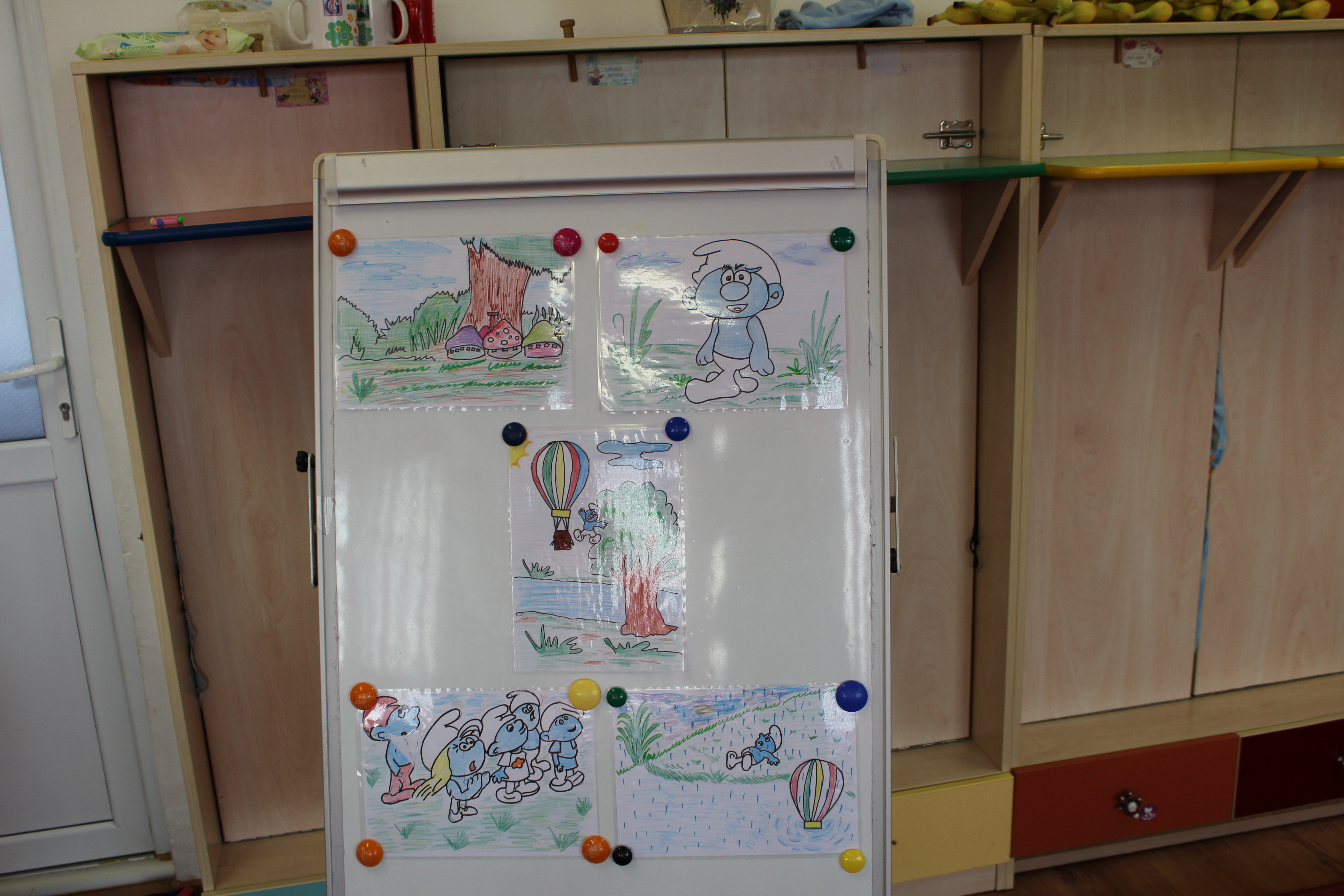 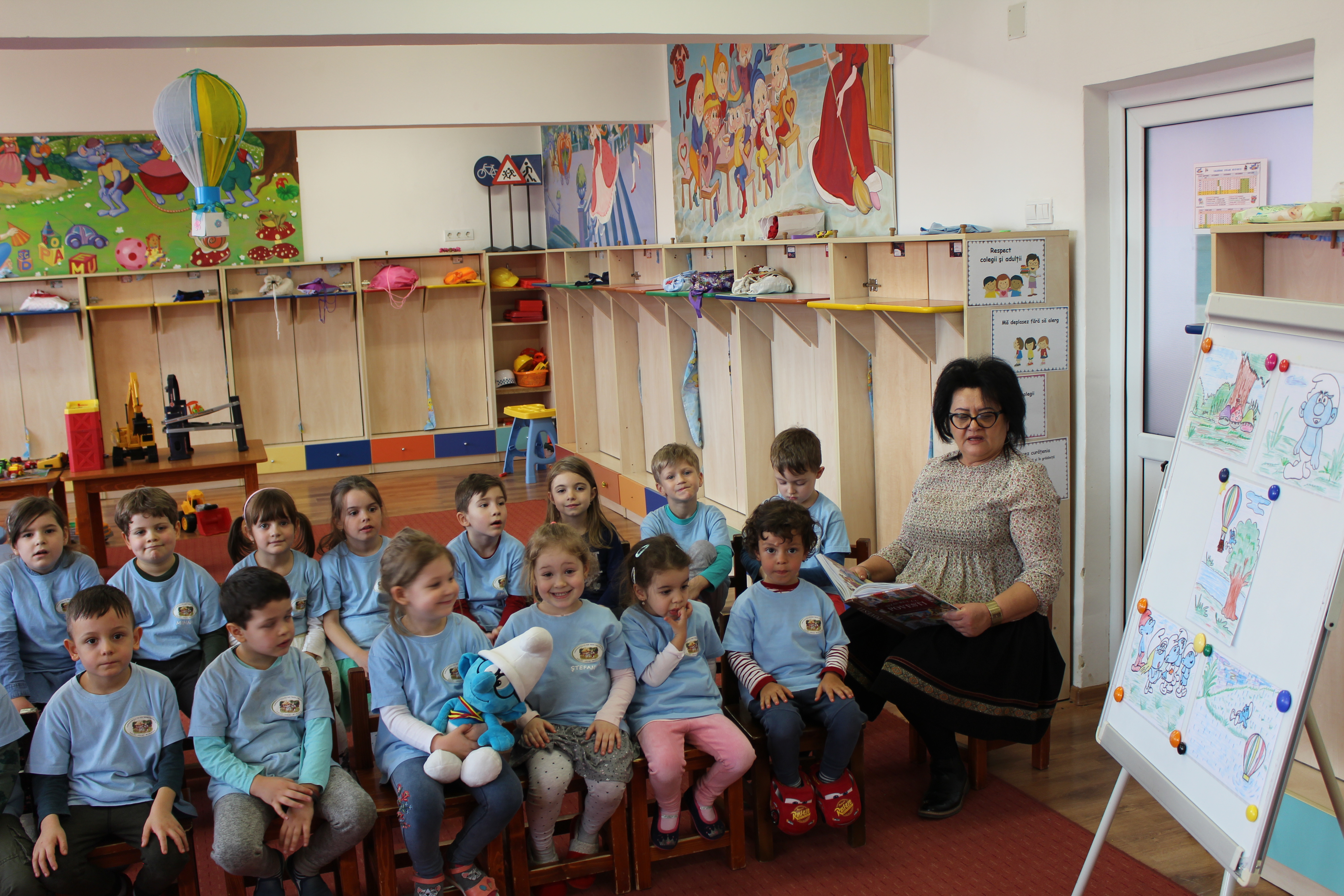 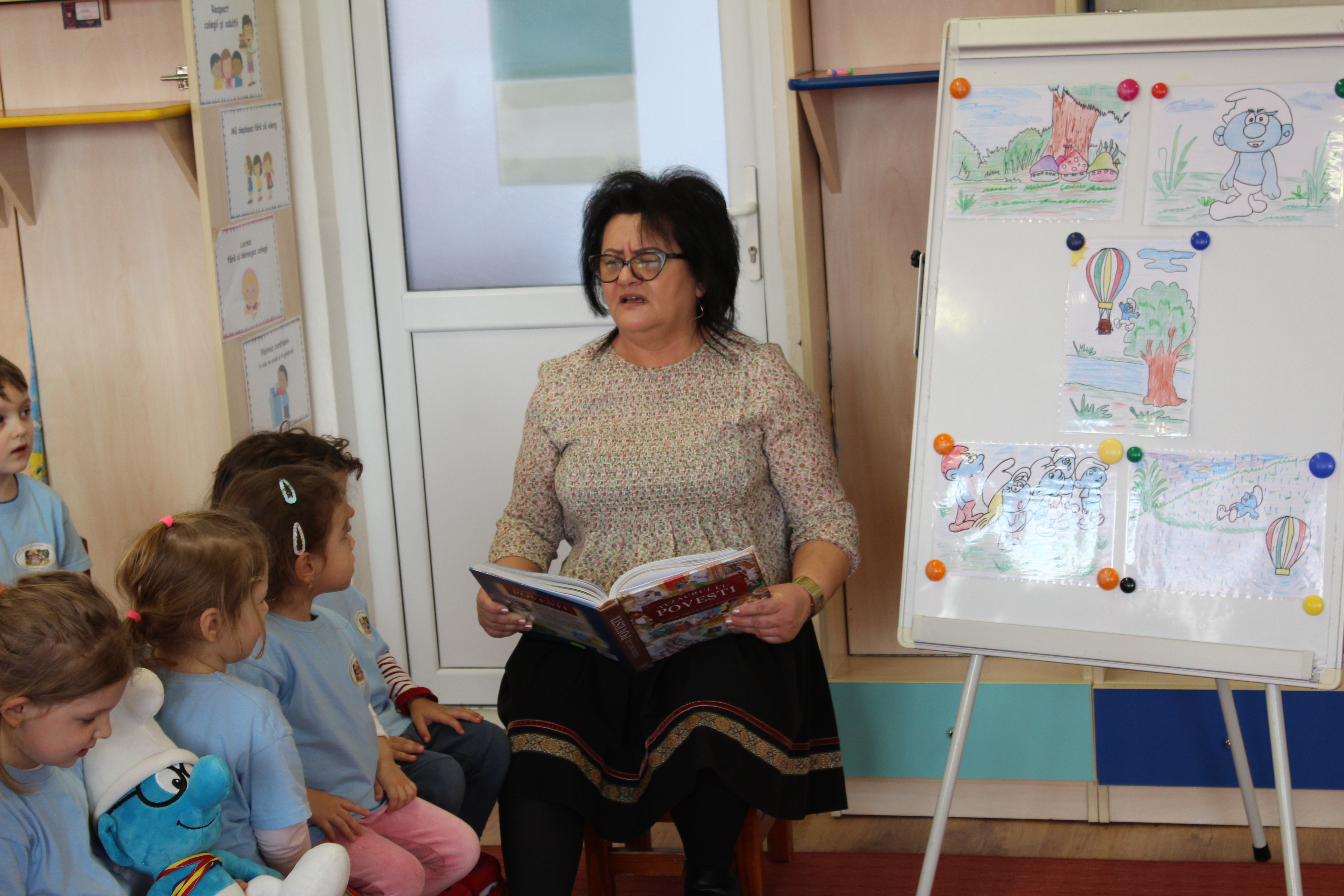 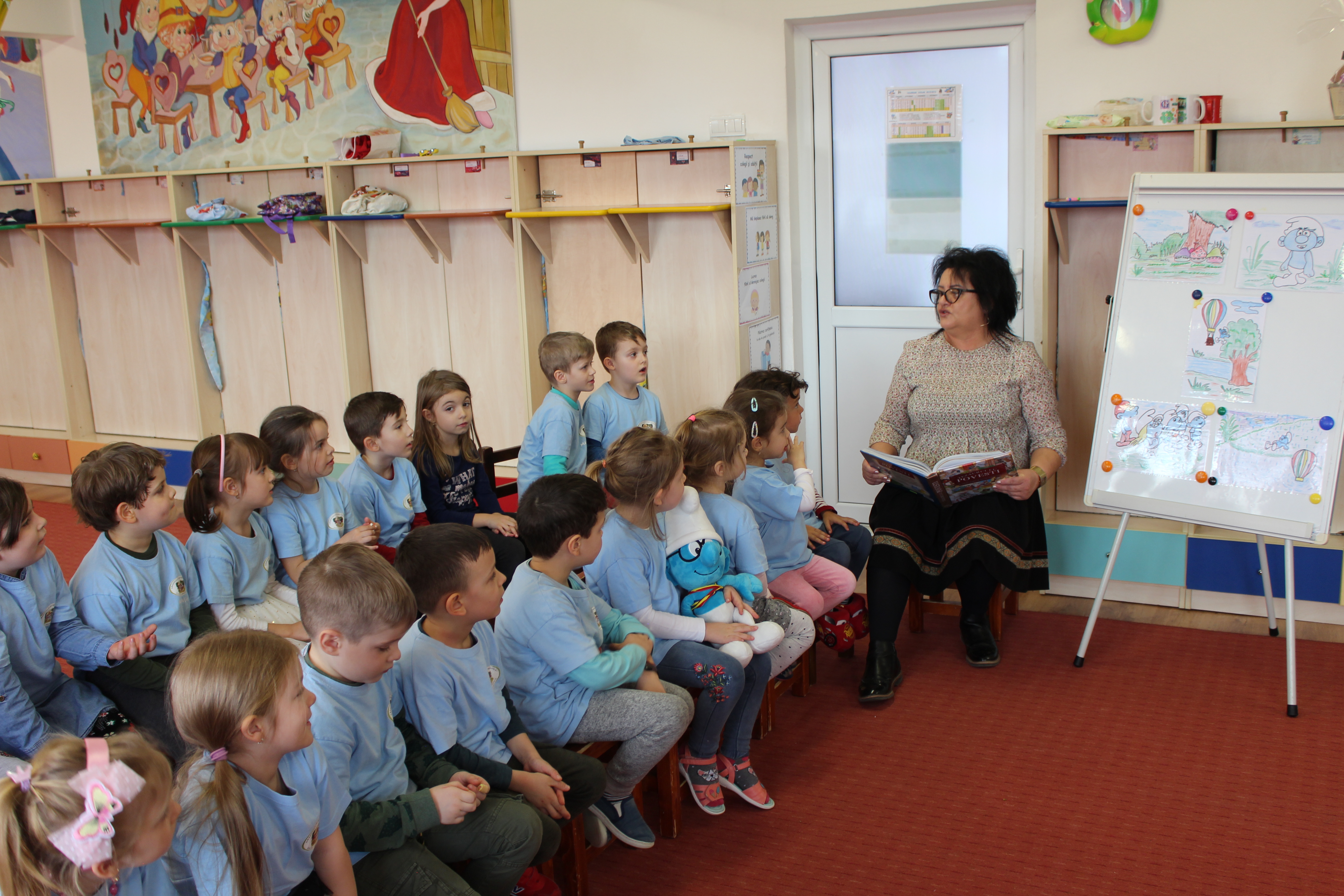 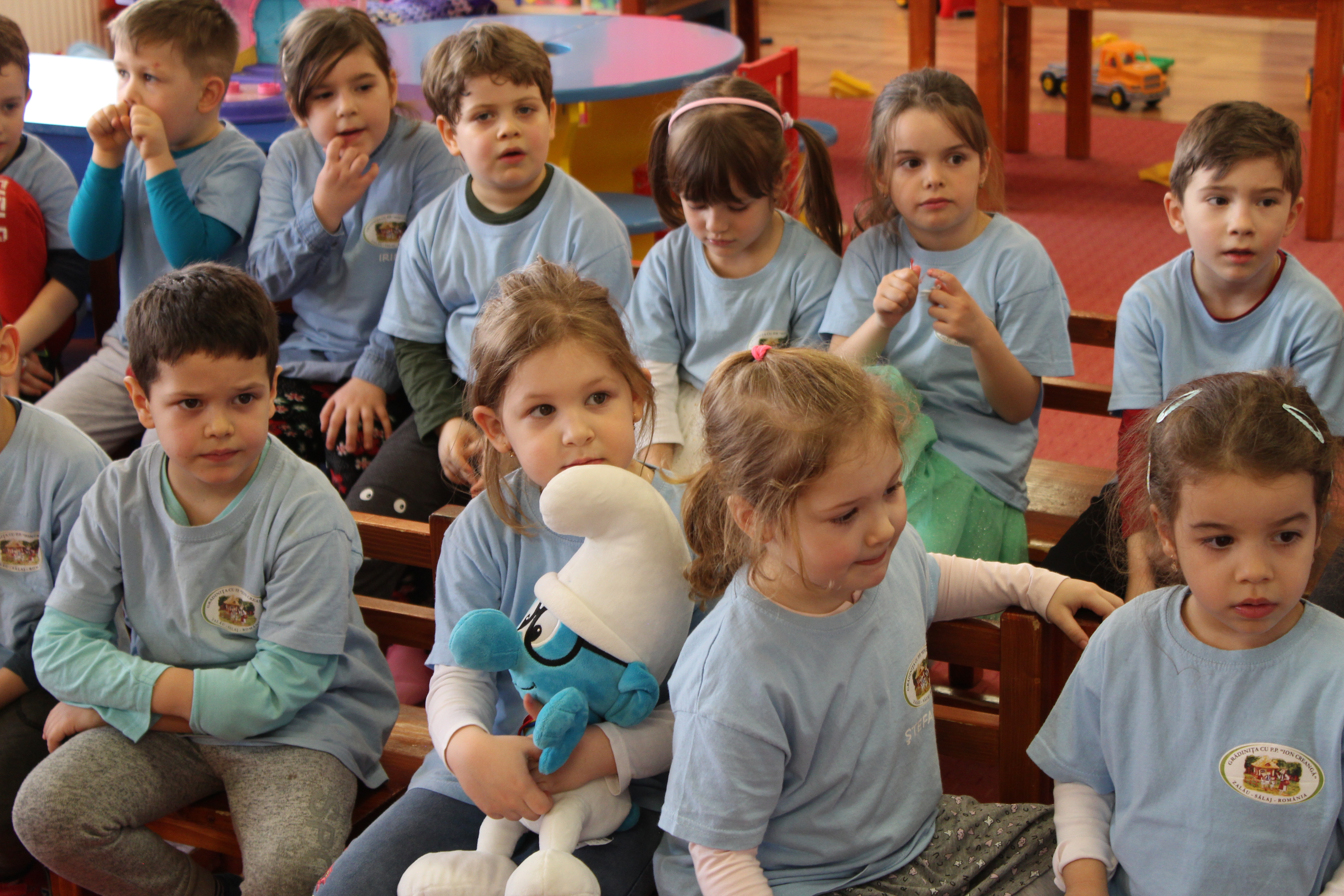 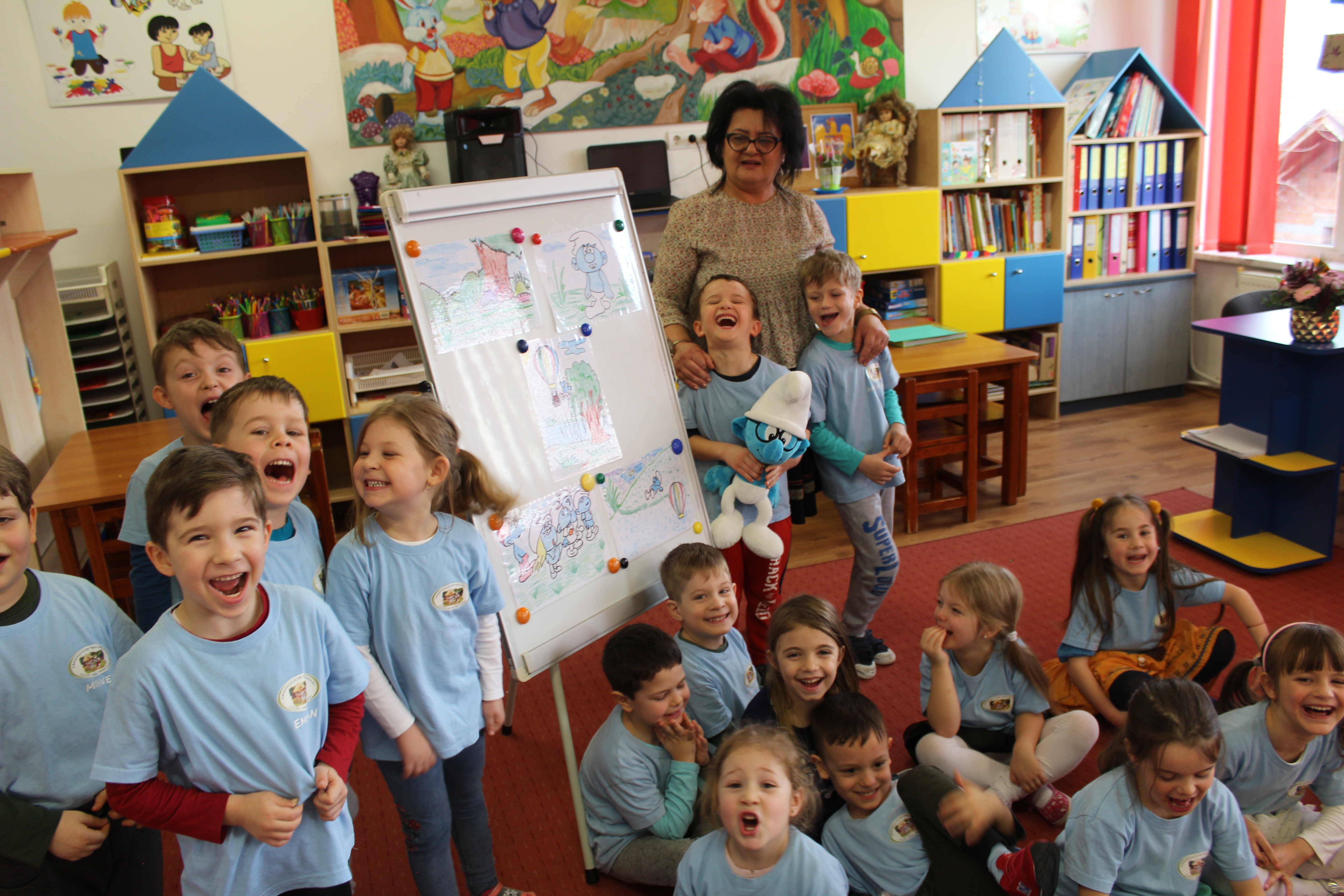 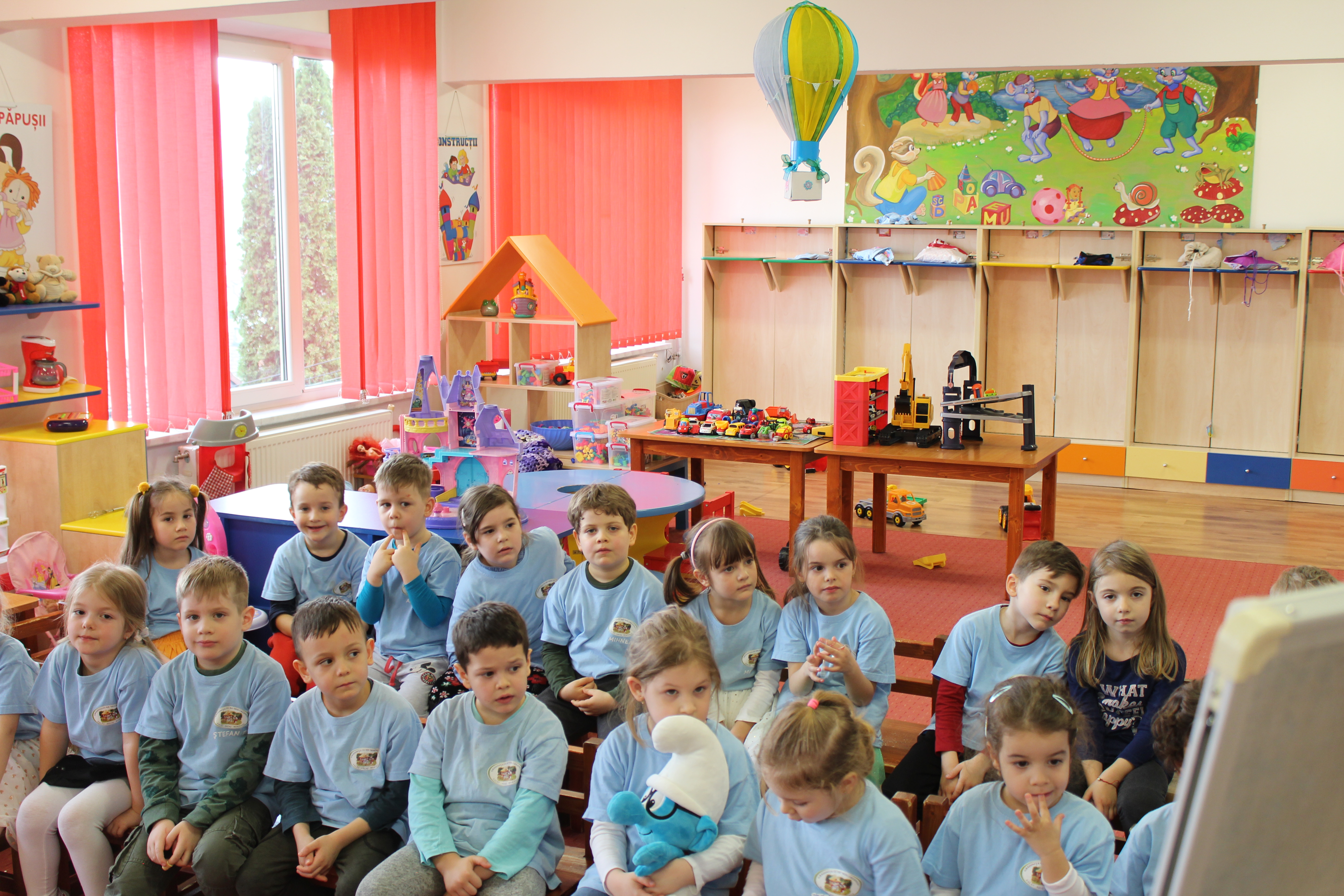